Access
From Barcelona there is a direct flight with Vueling. I traveled around the island with a rental car at the Lanzarote airport.

I took the plane to Lanzarote on December 27 at mid-morning. I arrived at the "H10 Rubicón Palace" hotel in Playa Blanca at around 3pm. I ate something quick and was already in the car. I wanted to benefit of the afternoon. 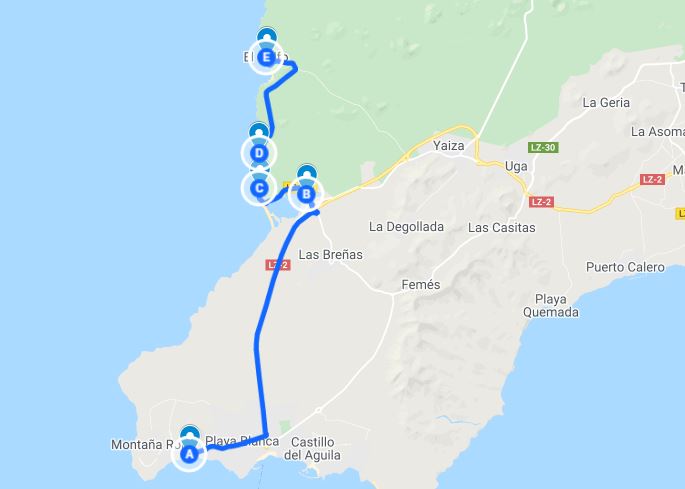 The LZ-2 highway is one of the main ones. It connects Playa Blanca with Arrecife (and Airport). From Playa Blanca, in just 10 minutes, you can reach the Salinas de Janubio. Before arriving, there is a viewpoint on the left. Parking is very large. It is worth stopping to enjoy the best views of the salt flats. It is one of the most unique and traditional spots on the island. Salt has been produced since 1895! The salt is collected between spring and early autumn, as it is the season of greatest insolation and least risk of rain. This aids the crystallization process. By the time I was there, I didn't have a chance to see it. There are guided tours where they explain the whole process.

A few meters further on there is a detour to El Golfo. Go around the salt flats and continue on the LZ-703 road. At the moment you stop seeing the salt flats, there is one of the most spectacular landscapes on the island. You have to leave the car in the viewpoint on the left; but, for me, the views are on the right (inland direction and not towards the sea). Many dark-colored volcanic stones occupy kilometers of extension and, in the background, the mountains. Wonderful!

Just 3 minutes away by car, you will reach Los Hervideros. It is a natural space formed by cliffs and caves. If you have enough time, it is advisable to go when the sea is brave. It is where the sea "boils", hits the caves and raises clouds of water. I did not see it so spectacular. The waves entered the caves and came out again with force; but without raising foam. Admission is free.

Less than 10 minutes by car and continuing on the LZ-703, you will reach El Golfo. This small town, which is soon seen, is one of the must-sees on the island. It is wonderful. Just in the entrance, there is a restaurant called "Siroco" with a large parking lot. Leave the car here and walk along the path on the left. This path leads to the Lago Verde. I did not arrive because it was dark at night; but I enjoyed a beautiful sunset on the first beach I came across. It is a beach of black volcanic sand with four boats placed on the sand and mountains of reddish earth next to it. A virgin landscape and very different from what we are used to. I liked the town of El Golfo so much to walk it at night that I returned during next day. It is small, quiet and very authentic. Rustic white houses and home restaurants on every corner.

The second day on the island it was time to go to Timanfaya National Park. 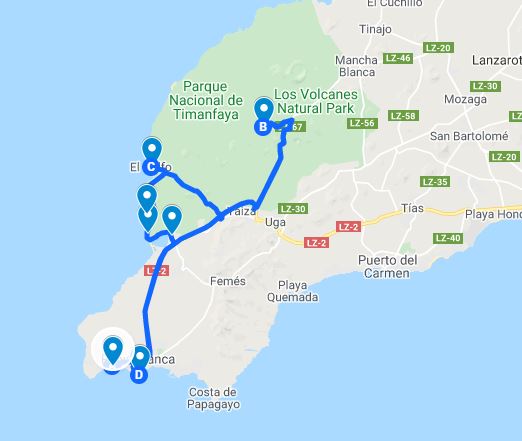 It is the biggest tourist attraction and I had to see it. I took the LZ-2 from Playa Blanca to Yaiza and the LZ-67 from Yaiza towards Tinajo. More or less halfway there is the detour on the left where you can already see the Montañas de Fuego. It is the only national park of a geological nature; in fact, it is the result of the volcanic eruptions of 1720, 1736 and 1824. The landscape is awesome. Wild and unspoiled terrain that is filled with volcanoes. A unique stage. I must say, by way of criticism, that everything that made me fall in love with the natural scene was spoiled by the way they have organized it. The only way to visit the park is to do the 14 kilometer route with huge, closed buses. They make two stops on the route, but you can neither go out to take photos, nor see the landscape without a glass in between. I think they should change the way the visit is done. At the end of the bus route, on the Islote de Hilario that is next to the parking lot, demonstrations of some geothermal anomalies are made, such as that the vegetation burns when introduced a few meters deep or how the water shoots out like a geyser. To end the visit, you can do the camel route at the Echadero de los Camellos. It is also very prepared for tourism, but it is fun...

At noon I did not spare a meal at the "Bogavante" restaurant in El Golfo. I have already said that this town made me fall in love. The place is simple, but it has a special charm. It is on the seafront and you can eat fresh fish. The salted prawns, the squid with wrinkled potatoes and the baked fish are really good.

After eating, at 3pm I started a quad tour with "Rent a Quad Lanzarote". Theoretically it had to last a couple of hours; but between the historical-cultural explanations, the wine tasting, that I was a bit clumsy with the quad at the beginning and that the guide got very involved, the route was doubled! We went from Playa Blanca to "Bodega La Geria" on a secondary paved road. The visit is amazing. Seeing how they cultivate the vineyards in the holes made in the volcanic ash was really a surprise! The holes are about 8 meters in diameter and are surrounded by small stone walls to protect it from the wind. Since I went with the quad company, the explanation has been done by himself; but if you go free you can hire a guided tour. To finish, they let us try dry wine and sweet wine. A very nice experience. We continue the route to Tegoyo, Conil and Tías. Here we already started to make route through mountain roads until we reach a hill next to Lanzarote Golf and from where there are wonderful views of Puerto del Carmen. We returned to Playa Blanca on mountain roads when the sun was already going down, enjoying very cool moments.

The last day I went to La Graciosa. 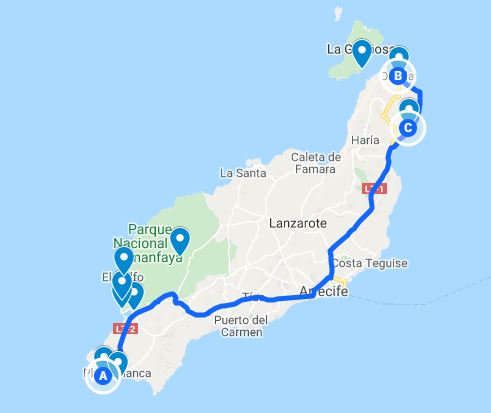 It takes an hour and a quarter by car from Playa Blanca (on the main roads LZ-2 and LZ-1) to Orzola, where the boats leave to La Graciosa. At the port of Orzola they indicated a parking lot to leave the car all day at no cost. In the same port there are different companies that make the journey to La Graciosa. For schedule convenience, I went with "Biosfera Express". In 20 minutes I reached the island. The approach by sea already makes it clear that the place is special. A white town stands out between the blue of the sea and the brown of the giant mountain behind. Luckily, they have maintained the authenticity of the island. There are no tourist shops or crowded restaurants with "Cold Sangria" signs as a claim. Get away from the port and walk through the middle of the town. The streets are not paved; in fact, they are sandy from the beach. The houses are very well maintained and have blue doors and windows. That tranquility made me fall in love. I would have spent a little time to discover the life of the island beyond La Caleta del Sebo. I spent a while enjoying the beach. The water is very transparent and frozen at the same time. I took the opportunity to peck at the restored "Girasol" and took the ferry back.

Before going back to the hotel and taking into account that the next day I was leaving, I had to choose between the "Cueva de los Verdes" and the "Jameos del Agua". I was doubting a lot; but in the end I opted for the most natural setting and, obviously, it was the "Cueva de los Verdes". It was created by the activity of the Volcán de la Corona. It was used as a hiding place for the population against attacks by pirates who came from North Africa during the 16th and 17th centuries. In the 19th century it became a must-see for travelers and scientists. The visit has a very cool surprise that I will not explain!

Lanzarote surprised me a lot and I really felt in love.


It depends on how you want to know the island.
To see the most essential with 4 days is enough.