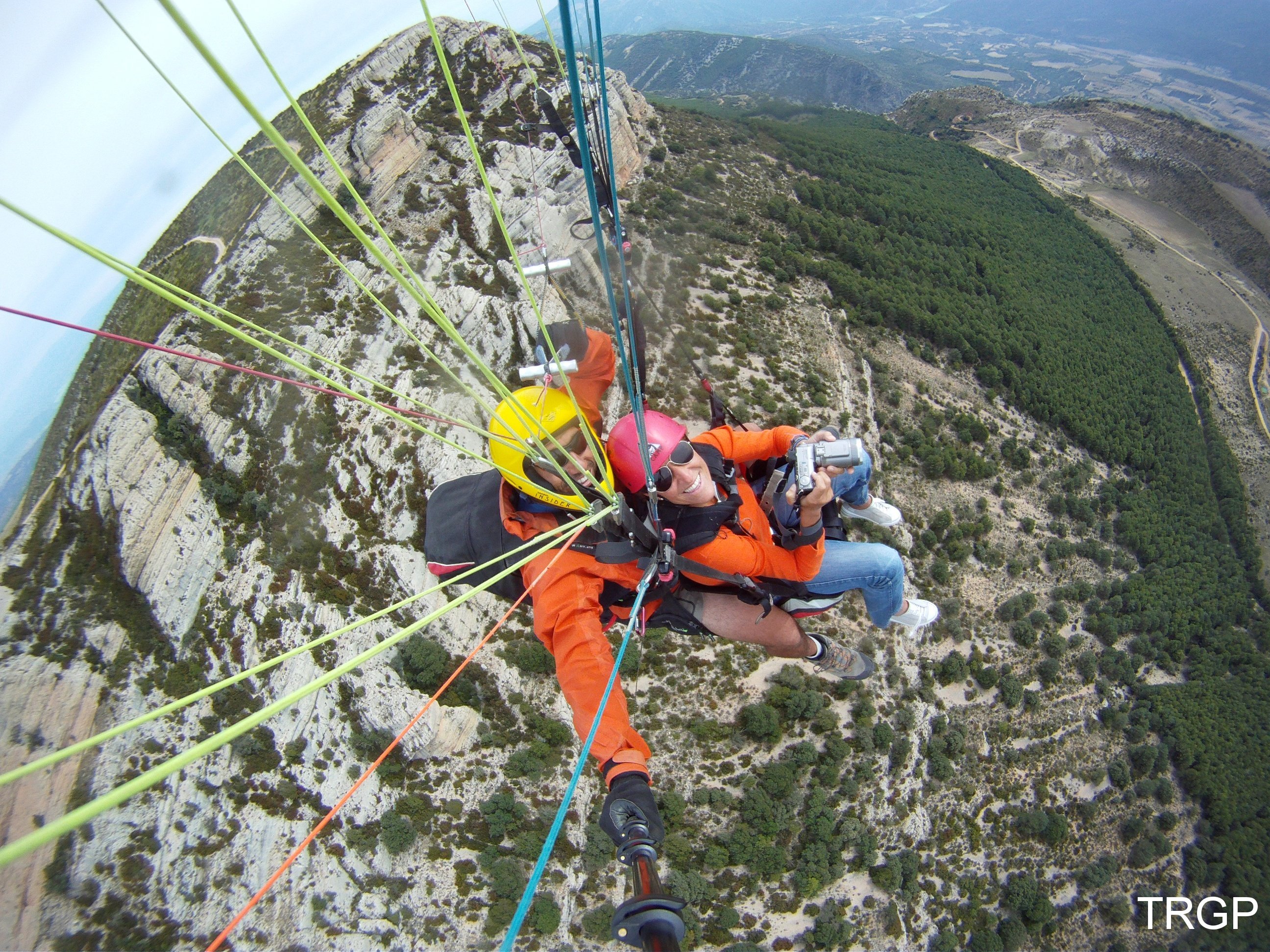 I had a plan to spend a weekend with friends in the Àger valley. The initial idea was to disconnect a little from the stress of the city and experience nature. We were clear that we would do the route on foot of the Congost de Mont-rebei; but there was not anything else planned until someone came up with the idea of paragliding.

At first, the proposal excited me a lot. It was an experience I always wanted to do and had never carried out. But as the day approached, the nerves grew in the belly.

One September 11th at 12pm we were having breakfast at the rural accommodation "Cal Maciarol". I have no idea what the apartments are like, but the sandwiches are great. In front is the paragliding office "Entrenúvols". It is just the right size to store all the material they need to fly. No luxury; because they want to spend less time as possible there. They only want to fly.

One of the things that I liked the most and that made me envious is the atmosphere between them. It is very cool to see how a group of friends share passion. They enjoy with their job and they do it together.

At 1pm we were already in their van to go to the flight field. The road is not easy. It is full of curves and has quite a slope. The pilots sing songs along the way and encourage you to sing all time. I guess it is their psychological game to distract and reassure people. The truth is that I am not able to say when the journey lasted...

Once at the top, the vertigo and nerves are huge. While they prepare the material on an esplanade; I did not know what to do. On one hand, I was trying to enjoy the wonderful views because having the whole valley at the foot was an impressive gift. On the other hand, that same gift became the suffering of thinking that I would have to drop myself minutes later by that precipice. I had a mixture of sensations.

When they have everything ready, the moment of truth arrives. The instant the pilot ties you to him, you realize there is no way back. I was lucky to do a "Flight Baptism" with Jordi Marquillas. He made the pertinent explanations with admirable calm. I remember that he only said to me: "We will do three steps and we will be flying. Let it be." So it was.

I was revolutionized. He was glued to me just behind. In front was an esplanade that, in a few meters, became a cliff. My heart was beating fast. When he said "come on", I was no longer touching the ground. I was very impressed to have to run towards the cliff. Everything was very fast.

And... suddenly, silence. It's funny, but I went from being so nervous to having radical calm and peace. I spent no fear. The views are spectacular and, as I was so relaxed, I was able to enjoy them as they deserved. I experienced a very authentic and unique feeling.

I was flying for about fifteen minutes. Enjoying. Taking a thousand photos and trying to record those images in my brain. In the calmest moment, Jordi says "scare or death". I made the great success of saying "let's dance". Without having time to digest what I had answered, Jordi turned me upside down! We did stunts and it was such a beast feeling I can't even explain it.

After living this moment, the landing is very calm.

If you can, do not miss the opportunity to do a "Flight Baptism" (it is not necessary to have experience, as you fly with an expert pilot) through the fantastic valley of Àger. It is one of the best free flight areas in Europe. It is recognized worldwide and is a fantastic experience.

I can't say anything more about Entrenúvols than they are a great team. They have an good human quality. They know how to reassure and psychologically control the nervous of the client. And at the same time they know how to make you enjoy. I love them!

Don't leave without buying the photo report! Trust me. You will thank me always.

About twenty minutes by car, is the hotel "Terradets". It is located on Terradets lake and offers great views of the lake.


Recommended for children, but not too young.