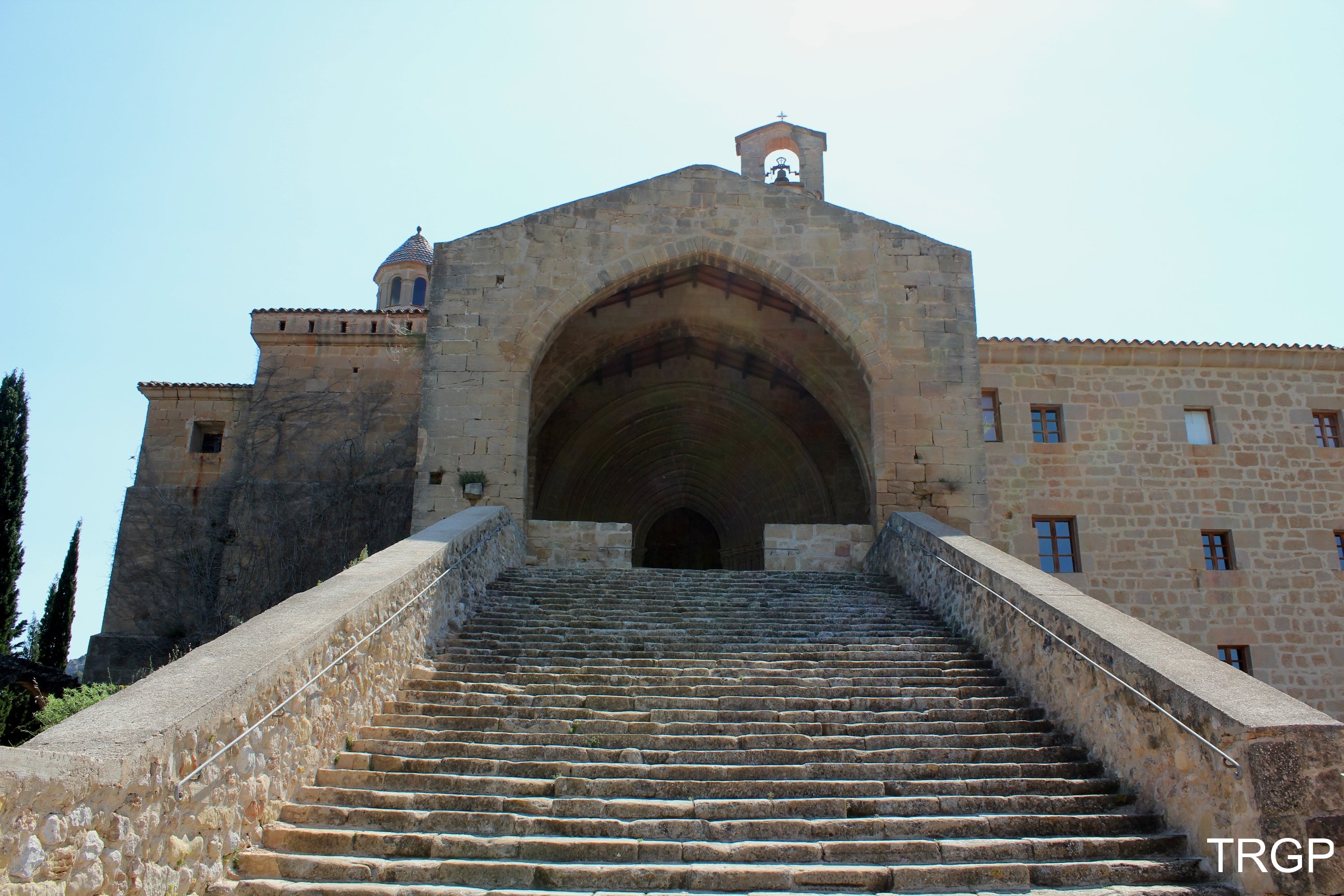 
Just before reaching Horta de Sant Joan, on the right there is a detour that leads to the convent.

It's a tiny street called "Carrer dels Costums d'Horta" (immediately, it changes its name to "Carrer de la Bassa del Mur") and where you will see a sign with directions to "Sant Salvador d'Horta" and "Muntanya de Saint Barbara"

From here, it is approximately 2 km of road.

I was staying at the wonderful hotel "Les Capçades" and wanted to do some excursion. I needed to have contact with the earth, live it closely but without complicating myself too much. I was recommended to visit the Convent of Sant Salvador and walk to the top of the Santa Barbara mountain.

I arrived at the convent with the car. The same road already gives fantastic views of Horta de Sant Joan. Leave the car in the parking of the convent and prepare to enjoy history and nature at the same time.

Making excursions improvised, sometimes, gives some disgust. And that is what happened to me. The convent was closed and I could only see it from the outside. Anyway, it doesn't worry me. I fell so in love with Horta de Sant Joan and I am sure I will return.

The official name is Convent de la Mare de Déu del Àngels; but it is more popularly known by the name of Convent de Sant Salvador for the stay made here by the Franciscan friar in the middle of the century.

The church, which is of Gothic style of Templar origin and date of the 13th-14th centuries, is preserved whole. Instead, the convent, which is Renaissance of the order of San Francisco of the XVI-XVII centuries, is in ruins. In short, it is an architectural complex, at the foot of the Santa Bárbara Mountain and arranged around a Renaissance cloister, which is worth visiting. In 1985 the mountain and convent complex were declared a cultural asset of national interest.

History, culture and nature coexist in this place without many tourists in the area. Except of  a family that went (like me) with the camera in their hands, the rest of the people I crossed were people from the town who did trekking.

Once I have gone all the way around the enclosure, I take the path that goes to the left and continue along the north face of the mountain. There are indications to the Cova de Sant Salvador, hermitages and summit. The road, which runs parallel to the high rocks of the conglomerate wall, goes into the mountain but always with the reference of the town in the distance. Along the way you can see ancient hermitages scattered across the mountain where friars once lived.

Do not forget to enjoy the wonderful views, but always be aware of the ground. I found a snake a few centimeters from my feet!

After 25 minutes I arrived at Cova de Sant Salvador. It is very small. There is an image of the saint closed behind bars and full of flowers. Legend says that he made water spring from the fountain. From here, a climb begins that leads to the Ruins of Sant Antoni, the ruins of the old Santa Barbara Chapel and the iron cross. I did not reach any of these last three points. In the cave I already undid the path made to arrive on time for my expected food in the restaurant "Miralles".

If you can, on the landing of the cave, invest a few minutes enjoying the views, silence and loneliness.

If you need and/or want help in organizing the getaway, do not hesitate to send me an email.


I was just over an hour to see the whole of the convent and make the walk to the cave (round trip). But I did not have time to reach the top.


No problem, but you have to take care of them.